Pawscessories is reader-supported. When you buy via links on our site, we may earn an affiliate commission at no cost to you. Learn more.

Golden retrievers are one of the most popular breeds for good reason. But what many people want to know before adding one to their family is if they’re aggressive or not.

The last thing you want to do is bring home a naturally aggressive dog.

What Real Golden Retriever Owners Had To Say About Aggression

The only real way to know if golden retrievers are aggressive or not is to ask a bunch of people who own one and hear what they have to say.

If one golden retriever is aggressive that doesn’t necessarily mean they all are. And vice versa.

So, I found a few different surveys that IHeartDogs did which got real golden retriever owners to answer a few questions.

First, would you say that golden retrievers are good family dogs?

Second, does your golden retriever get along with other dogs?

And third, is your golden retriever friendly with strangers?

Based on the answers to these questions, as well as the detailed responses some people gave, we can confidently answer whether golden retrievers are aggressive or not.

Let’s look at the results for each of these questions.

Absolutely no one said they weren’t.

15% of people said they get along okay with other dogs.

5% said their golden retriever doesn’t get along with other dogs.

A few people gave detailed answers I felt were very helpful that you can find below.

Peggy said: “My golden retriever is a very gentle loving dog. He loves people and they love him. I have had 3 grandkids since I rescued him 9 or ten years ago and he has never gotten upset with any of them and they have all been rough with him at one time or another. They absolutely love him and he could spend hours letting them pet him.”

Cristi said: “From my experience golden retrievers are very gentle, especially with little ones. They are the ultimate givers of love and we all could use a little more love!”

Cydney said: “Goldens are very loving, gentle, and they have what’s called a “soft mouth” so they don’t bite down hard”

My Take On The Survey Results:

The results of these three surveys paint a clear picture that golden retrievers aren’t aggressive.

If a dog is good with strangers, in families with kids and when around other dogs, it’s safe to say they aren’t naturally aggressive.

A few people mentioned that their golden was being aggressive during their puppy stage.

But this is common in many breeds when they’re learning boundaries on how to play nice as well as going through major bodily and hormonal changes.

Also, many owners said their pup went through the same phase and grew out of it.

So the loveable breed that you see in many TV shows and movies lives up to the hype.

But it’s definitely not impossible for them to be aggressive.

Let’s look at a few reasons why golden retrievers will become aggressive as well as tips to prevent it from happening.

8 Situations Where Golden Retrievers May Be Aggressive

If a golden retriever has unfortunately been abused in the past, been abandoned, bitten/attacked or experienced anything traumatic, it can cause them to be aggressive.

Simply because they have low trust and feel the need to always have their guard up.

It could be that they’re aggressive toward other dogs because they were attacked as a young pup.

Or, it could be that they don’t like people because one abused them when they were young.

A golden retriever that was abandoned could also become aggressive/overprotective because of how attached they’ve gotten to you.

All of these situations can make golden retrievers aggressive because of a painful past.

If a golden retriever isn’t obedience trained and is allowed to get away with things such as jumping on people, barking excessively or being mouthy, they can easily become aggressive.

This is because they are given mixed signals by their owners.

On the one hand, the owner is telling them not to jump up on them, but on the other hand they’re getting attention, pats and rewards for jumping up.

If they’re just a puppy many people will pick them up when they’re misbehaving which only reinforces the behavior.

This type of attention/affection is ultimately what they want and if they learn that behaving aggressively gets them attention, they’ll want to keep doing it.

As an owner it’s important to know what message your actions are actually sending to a dog since they don’t understand your words.

Socializing is super important for all young dogs.

Without plenty of socialization a golden retriever will never learn how to properly behave around other dogs or unfamiliar people.

Which leads many to become aggressive.

They don’t understand that unfamiliar dogs and people have the potential to be friends and instead see them all as potential threats.

Of course both of these aren’t real threats 99% of the time.

But because they didn’t get many experiences with unfamiliar dogs, people and places they don’t know how to behave nicely.

There are some health issues that can cause a golden retriever to become aggressive.

If they’re in pain, for example, they may lash out at the people or dogs around them because they’re uncomfortable.

This is usually because they feel vulnerable and don’t want to appear weak.

Or, if they have a cognitive disorder it can manifest as aggression because they may not be able to control their impulses.

Golden retrievers who are in pain or have a cognitive disorder can become more aggressive as a result of them being unwell.

Fear is another common reason why golden retrievers, and all dogs for that matter, become aggressive.

They may be afraid of other dogs, people, loud noises or anything that they perceive as a threat.

This fear can cause them to act out in aggression because they feel like they have to protect themselves and their family.

Many times the aggression will start as barking or growling as a warning to the other dog or person to stay away.

But if they feel that their warning isn’t being respected, they may attack.

Unfortunately, there are some bad breeders out there who don’t care about the temperament of their puppies.

All they care about is making a sale.

So they may breed two dogs who aren’t good with other animals together which will often result in aggressive puppies.

Or the breeder may isolate the puppies which can also lead to them becoming aggressive.

When looking for a golden retriever, it’s important to do research and find a reputable breeder.

Just like with people, hormonal changes can cause golden retrievers to become more aggressive.

This is especially true for female golden retrievers who are going through their first heat cycle.

They may become more territorial of their home and family and may be more likely to attack other dogs or people.

With males their aggression will be toward other males if they haven’t been neutered yet.

8) They Think They’re In Charge

Some people mistakenly think that because golden retrievers are so friendly and love people, they must be big sucks.

So they may not be as diligent about training them as they should be.

Which causes a golden retriever to think they’re in charge and need to behave aggressively to protect their pack.

It’s important to start training a puppy as early as possible and to be consistent with the rules.

That way the dog knows that you’re in charge and they’re not.

If they do think they’re in charge they’ll take it upon themselves to be overly protective and lash out more often.

1) Lots Of Socializing When Young

One of the best ways to make sure your golden retriever isn’t aggressive is to socialize them when they’re young.

Introduce them to lots of different people, dogs and places.

This will help them learn that unfamiliar things aren’t a threat and that they can be friendly with everyone.

It also helps them learn that you can pay attention to other dogs and people without loving them any less.

Many unsocialized dogs get used to their owner only paying attention to them which makes them act aggressively when ‘competition’ shows up.

While training is known for teaching your pup certain tricks or behaviors, it also helps teach the proper family dynamic in your home.

Which is that you’re their leader and they’re not the one in charge.

Make sure that you’re consistent with the rules and that there are no grey areas.

Dogs hate ambiguity and if they’re not sure what’s allowed and what’s not, they’ll often take matters into their own hands.

Training will also help channel their energy into something positive instead of negative.

A lot of times aggression is just a way for the dog to release pent up energy.

If they’re getting regular exercise and training, they won’t feel the need to take it out on people or other animals.

Catering to your golden retriever when they behave aggressively is a surefire way to make them want to continue behaving this way.

If they’re growling or lunging at someone and you get scared and give them what they want – usually attention, petting or treats – then you’re reinforcing that this is ‘good’ behaviort.

It’s important to stay calm and not give in to their demands otherwise you’ll be stuck in a never ending cycle.

This of course doesn’t mean simply allowing them to behave aggressively.

It means understanding the proper response to how they’re behaving to send the correct message to them.

When a golden retriever is behaving aggressively they’ll always have a ‘trigger’ that sets them off.

It could be another dog, a person, a noise, anything really.

Figuring out what this is can be tricky but it’s important to find it if you want to help stop the aggression.

Once you’ve found their trigger you can work on desensitizing them to it.

Which means putting them in a safe, controlled environment with whatever makes them aggressive and gradually exposing them to it while remaining calm.

The more time they spend around their trigger in a safe environment the more used to it they’ll become.

Which eventually will stop whatever it is from being a trigger for them.

When it comes to aggression, this is definitely something you want to fix as soon as possible.

Or ensure it never becomes a problem in the first place.

For the safety of your dog, family and neighbors.

Which is why consulting with a professional dog trainer is never a bad idea.

Whether it’s online or with an in-person trainer.

Would you say that Golden Retrievers are good family dogs?

Does your Golden Retriever get along well with other dogs?

Is your Golden Retriever friendly with strangers? 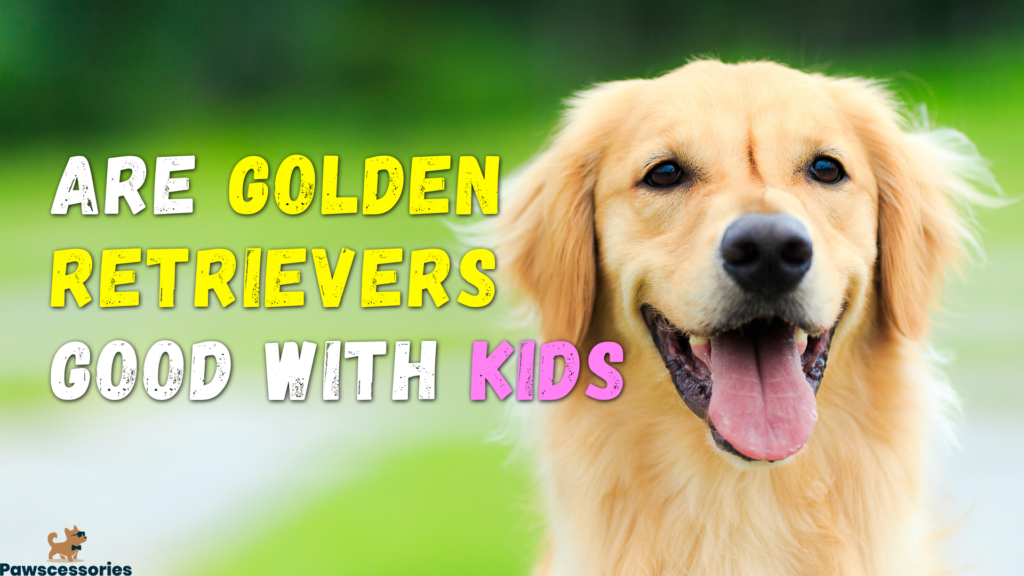 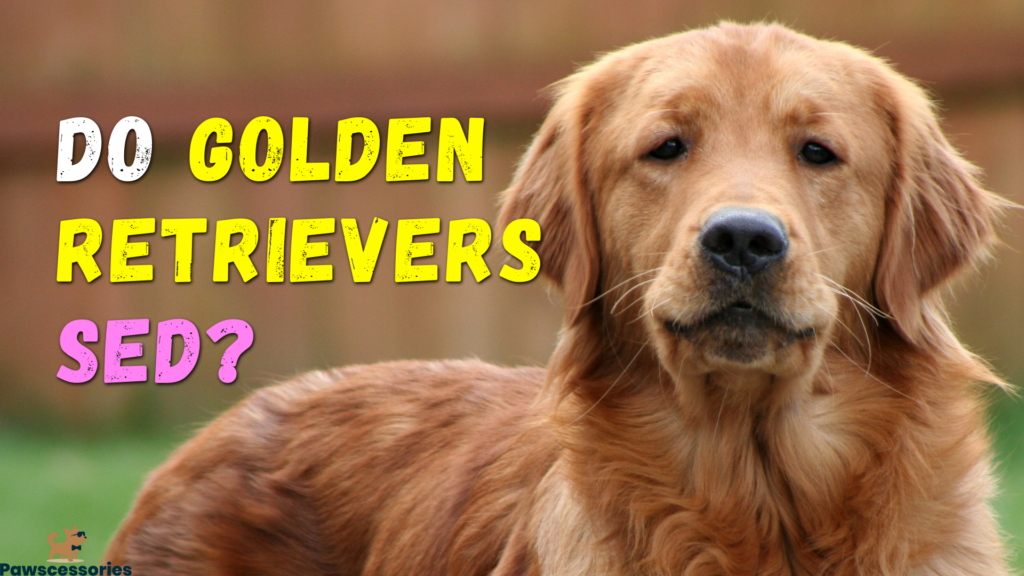 Hi, Alec Littlejohn here. I'm a lifelong canine enthusiast that grew up in a family of vets. Read more

Pawscessories does not intend to provide veterinary advice. While we provide information resources and canine education, the content here is not a substitute for veterinary guidance. Always consult with a licensed and credible veterinarian for dog-related concerns.